skip to main | skip to sidebar

Ok, due to popular opinion... my little boy should look like a... boy! I personally already miss his fluffy red hair and think he looks too grown up now,... but it will grow again! 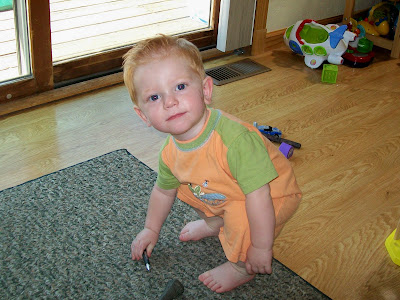 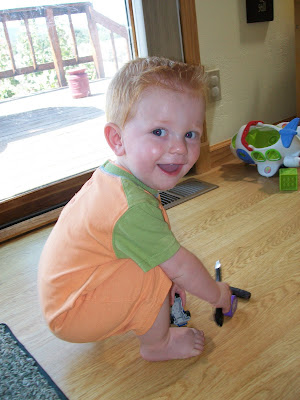 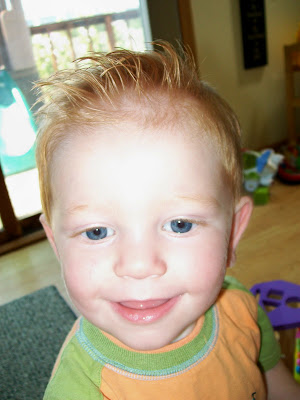 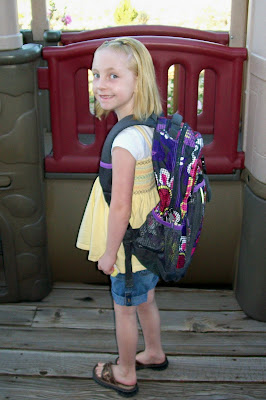 I am the worst at taking pictures 'in the moment' but I thought I ought to document Jasper the school girl (1 1/2 weeks late)! 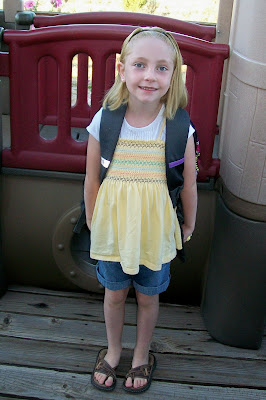 Her teacher told me a funny story about her yesterday... They spotted a Mountain Lion right outside the fence at the school, so her teacher called all the other teachers to let them know that recess would need to be inside because of a L-I-O-N (she spelled it in order to keep the kids from freaking out) and after a minute Jasper pipes up "A LION??" after which all the kids did indeed freak out. :D
Aric and I learned last year that if you want to keep a secret from her, you don't spell it. That just makes her more curious. We use Pig Latin instead! :)
Posted by Brooke at 1:27 PM 3 comments

I have been going back and forth on the issue of cutting Aram's hair... 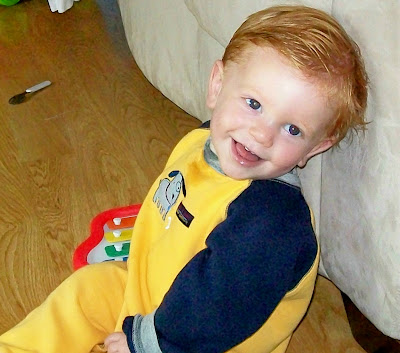 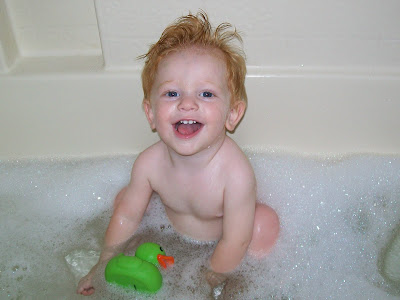 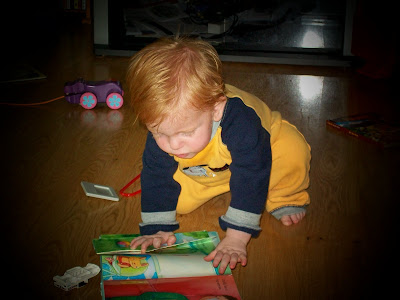 Since school started back for Jasper, Aram has been like a little tornado blowing through the house. I thought he would be really whiny because he is the type of kid that needs to be entertained, but instead he seemed excited to finally get the chance to have everything in the house to himself. No one to take toys from him, or things he is not supposed to have, and only one person to try and keep him out of trouble now. It is hard keeping up with him. I admit some days I have barely tried, thinking I will just have one large mess to clean up later rather than a million small ones all day. It is also very cute to watch his joy at all the little things he finds to play with. He and I have the chance to play games together and cuddle. The best part is when his Sissy comes home, he is so excited to see her he actually gives her loves without us telling him to. It is just darling!
Some fun pictures of bath time... 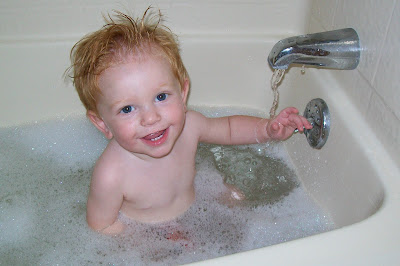 He gets so excited about the water coming out of the faucet! 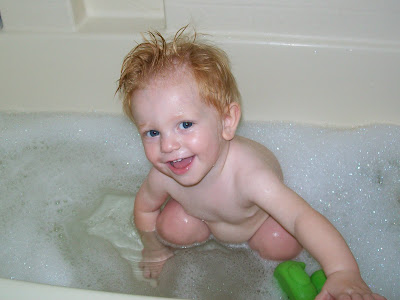 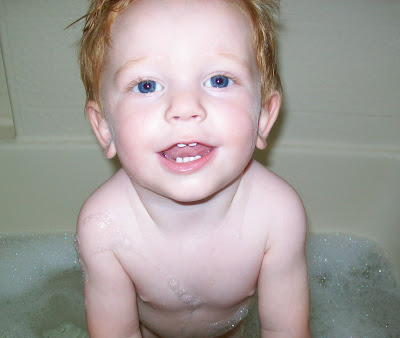 He tries to climb out of the tub. 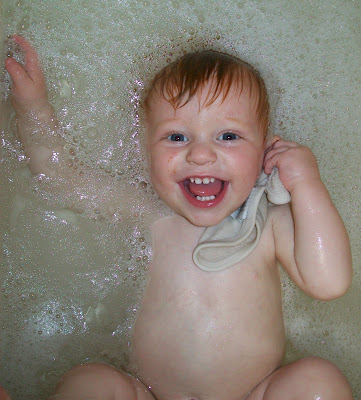 He must think it feels funny to lay down in the water, because he gets very silly about it.
Posted by Brooke at 9:24 AM 0 comments

Birthdays are supposed to be fun, right? I thought Jasper was still reeling from her new baby brother last year during her party and that is why she was so ornery. Well, I have decided it is just this girl... She is just pre-pubescent! She was not just ornery this year, she was snooty and rude and in general not a whole lot of fun. Is she 6? or is she 16?
I have sworn off Birthday parties for her. We had SEVERAL episodes of crying and acting out that I just could have done without. So, no more parties! :) (yeah, right!)
The best part about the day was the morning of her birthday where she actually acted excited by a few things. Grammie and Papa bought her a new bike that she just loves! (I haven't gotten a chance to get pictures or video of that yet.)
Her Daddy bought his little 6(teen) year old some earrings, of course the dangle-y ones were her favorites that I won't let her wear yet! :)
For years now, she has been using pencils as her Harry Potter Wands (the kid is obsessed with Harry Potter) but this year we decided it would be fun for her to have the "real" thing!

I think even she was surprised at her magic skills when she "disarmed" her Dad! :) Her face is so cute in this! 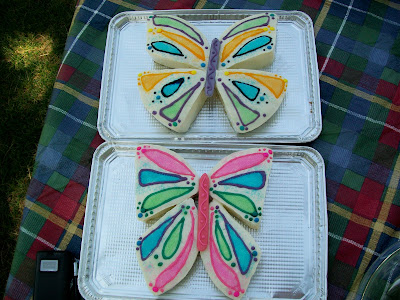 I goofed on the top one, but I thought her Butterfly cakes still turned out well! They were fun to make and she was very excited about these, so it was worth all the hard work! 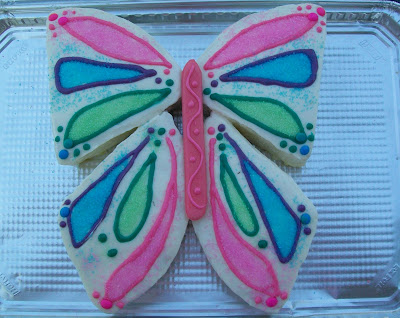 This is the one that turned out like it was supposed to. 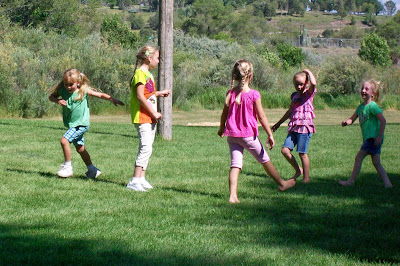 Out of all her options (Bowling alley, Rec center swimming pool) she wanted to have her party at the park next to her school. The kids love the old fashioned Merry go Round there. You don't see many of those at parks nowadays! We didn't have a huge crowd of kids, but there was enough to play games and run around with (when she wasn't pouting)! 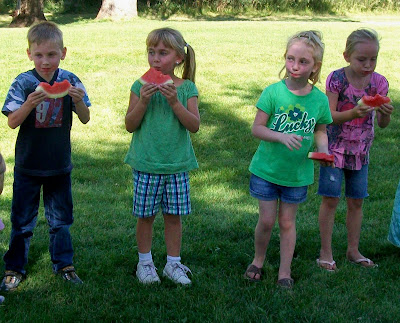 The Watermelon eating contest! :) These are her buddies from school, they have been joined at the hips since Kindgergarten first started. 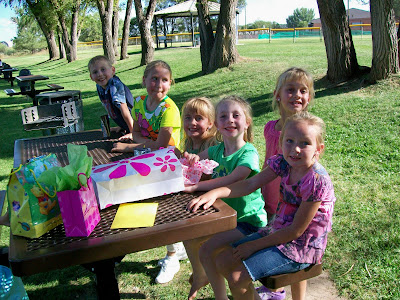 Ready to open presents. She thought this was the most important thing, of course!

The only present she was animated about was the movie, Delgo, that I bought her.


Blowing out the candles and wishing that... next year this is more fun! 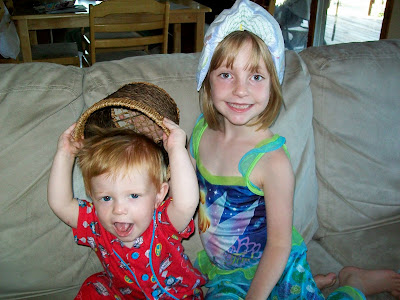 I brought both of my kids in for their yearly checkup this week... the Stats are as follows:

Aram weighed in @ 20 lbs. 8 oz./17th percentile
29 1/2 in. long/ 38th percentile
and his head was also in the 38th percentile (which had by far grown the most!)
Hopefully that is why this kid is getting so smart these days! :) He talks up a storm now (mostly babbling)! His favorite thing to say,.. "What is that?" Curious little fellow! He is getting friendlier. He gives loves to the whole family and actually likes some strangers now. It is fun (and nerve wracking)to watch him figure things out. He climbs all the stairs at Grammies house like a champ now and then taunts us from the top to try to get us to chase him down! He loves to dance, if he hears music he will get his little boogie going immediately no matter what else he is doing, he will even sing to himself just for an excuse to dance! He still won't sit still to watch a baby show and his naps have almost disintegrated, leaving me with very little time to myself. He loves to read books, and would still rather play with my stuff than his toys. 1 year old is a fun age!

Jasper at almost 6 years old
weighed 43 pounds/42nd percentile
and was almost 45 in. tall/45th percentile
She has grown so much this year, we used to think she would always be on the small end of the growth chart (she wasn't even on it until she was 2), but she has passed up many of our expectations. She will be starting 1st grade the day before her birthday. I think she is excited to go back to school, but she has hated doing any 'homework' this summer. She loves to play learning games on my computer, although she hasn't gotten to much lately. When she got her computer privileges taken away (yet again) for bad behavior, she asked (in her sassiest voice) "Why do you always take away the computer when you KNOW that is what I like the most!!" My point exactly, my dear! :) She refuses to go outside to play by herself for fear of bugs! She likes to play with her brother and to 'mother' him until he screams. She is still our cuddle bug and likes to be the center of her parents attention. She has been very inventive this summer using plastic silverware attached to her drawings to make puppets. I could wish that she would be more obedient, but I suppose this is typical for the age. She is a huge helper around the house, and her brother and I will miss her fun personality during the day once school starts.
Posted by Brooke at 7:35 AM 3 comments